Are you an Enneagram 1 or 5 or ?
Or on the Myers-Brigg Type Indicator (MBTI)–an INFP? ENTJ? ESTJ?
Or in the Reich’s system: a schizoid? oral? rigid?

It’s been helpful to me in understanding myself and others to use information from personality systems.

I am an INFJ; a Rigid personality; and possibly Enneagram type One.

There are five major character types described by Barbara Brennan in her Hands of Light, our basic textbook for four years of study at BBSH.  The summaries that I’ve included may not be totally accurate but will provide enough information so that you can, as with the Enneagram types, recognize aspects of your personality in the descriptions.

Although I didn’t create the labels I nonetheless apologize for the fact that the labels for each are not flattering.  Rather than change the names to be more appealing, I will leave them as is to avoid confusion.  I will arbitrarily use “he or she” and “him or her” when discussing these types.

In fact, it’s helpful to see how we can identify with some aspects of other types—again, because the purpose is to find as many access points to the wounded heart as we can. 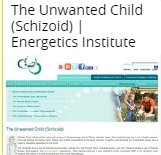 The first type, the Schizoid type suffers from being hurt very early in life, possibly even in the womb, where he senses a hostile and angry mother.  He may feel rejected, abandoned or betrayed because he expected love and nurturance.  The basic response is to leave himself, and he does this by staying out of his body and heart and remain in his head.  He may become spacy, thus leaving his body.  His basic belief is that he has no right to exist and that the world is a dangerous place.

The Schizoid’s main defense is to be absent emotionally.  Just as his mother was absent and preoccupied with her own needs, he duplicates the strategy.  He is full of fear and anxiety because his experience of the world through his experience with his mother is one to be feared.  Hence he keeps everyone at a distance and intellectualizes his living in the world.

The Child-Heart process can use anxiety/fear as the basic emotion to meet the young self.  Since the Schizoid’s strategy is intellectual, it’s important to notice when thoughts come up when attempting to contact the child’s wounded heart. It’s important to go beyond analysis and thinking, a basic Schizoid strategy.

In the Child-Heart method I’ve worked with at least two individuals who have this basic personality type.  Fear or terror has been useful as a way to contact the child-self. However because of his early wounding, it is difficult for the young-selves to trust and feel safe.  We have started interactions with just a vague sense of the young one because he hid in the shadows.  Appreciation of his strategy, acknowledgement of his fears, and patience were needed before more interaction occurred. 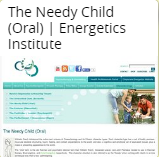 The Oral experienced a wounding of being abandoned by mother:  either by absence, long or very brief, or by mother not providing enough nurturance.  The child therefore reacts by pretending to be independent too early which is expressed often by walking and talking early.

The oral type basically feels empty and deprived.  She tends to want to cling and grab. The inward longing for support leads to strategies to get mothering from others.  Often people feel drained after spending time with an oral personality.

The wound of being abandoned can be turned into beliefs about not being good enough, not lovable.  She finds it difficult to be alone and tries to get the warmth and support needed from others.  Emotions that may be accessed are feelings of being empty and anger/rage for being abandoned.

In the Child-Heart method, it’s helpful to be watchful of the tendency for excessive talking by the adult or the young-self in interactions.  No matter how the child-self expresses herself, it’s important to remember that learning what is hidden in her heart is the point of the healing. 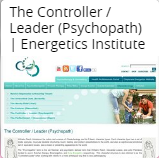 The Psychopathic personality type faced a difficult challenge early in life when something went awry with the parent of the opposite gender.  A triangulation occurred where the child couldn’t get what he needed, and therefore felt betrayed.

The prime strategy used in life is manipulating and attempting to control others. This is sometimes accomplished through bullying or domineering, or by charm.

On the surface the psychopathic type feels superior and contempt for others which hide deep feelings of inferiority. He also believes that he is special and knows what is right.

This personality type also favors the mental realm but also takes little responsibility for what goes wrong in his life. Hence, personal development work would never appear as an option and emotions would not be easily accessed.

Many of us can nonetheless identify the need for control and the need to be right that is common with the psychopathic personality.  They are strategies that may lead to a child-self who decided to adopt them to survive his early hurts and to prevent future ones. 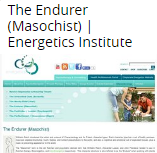 The Masochists experienced conditional love in her early life.  Love was conditional on whether she complied with mother’s agenda to control what and when she ate, and how and when she eliminated from her bowels.  All efforts to express her own needs were squashed so she felt defeated and trapped.

Outwardly, the masochistic type is very likeable because she complies with people’s agenda and needs—a people pleaser.  She is a giver or helper like 2’s and is usually well-liked.  It’s an easy and natural strategy for her since she may have little sense of her own needs having been neglected so early in life.

The masochistic type may tend to whine and complain which is the only sign of the strong anger that is denied or suppressed.  The strong feelings of superiority, negativity, even rage that are held tightly within, cause tension in the body especially in the neck, jaws, and throat as well as the pelvis. In short, her defense is suppression of her needs and anger.

Focusing on what lies beneath the whining and complaining may lead to discovering the underlying feelings of rage and negativity. The young child’s wound may be a belief about not being important or worthy enough to deserve unconditional love. 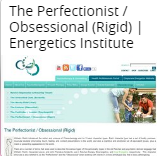 The Rigid personality type was rejected by the opposite-gender parent and carries wounds of betrayal.  The rejection led to her believing that she isn’t good enough or lovable. The child decided to control all feelings by holding them back, walled up in her heart—a perfect strategy to feeling balance and stable in her life.

From the outside then, the rigid personality appears stable emotionally.  She is worldly and can be ambitious and competitive, the over-achiever.

Emotionally vulnerability is avoided because she fears betrayal.  It may require much patience to find access to emotions. She is described as having a “frozen” heart. Besides patience, building trust is important for the adult and for the Childheart process with the rigid personality.

With any personality system, it’s important to remember that the formulators of them didn’t intend that individuals identify purely with one type.  In fact, from the spiritual point of view, maintaining any kind of identity is an obstacle to spiritual growth.

These descriptions and discussion were provided to broaden and deepen our understandings of ourselves and others–ultimately to build sympathy and compassion for each other.  In terms of the Child-Heart, please use them to gain further clues that provide access to the young-selves.